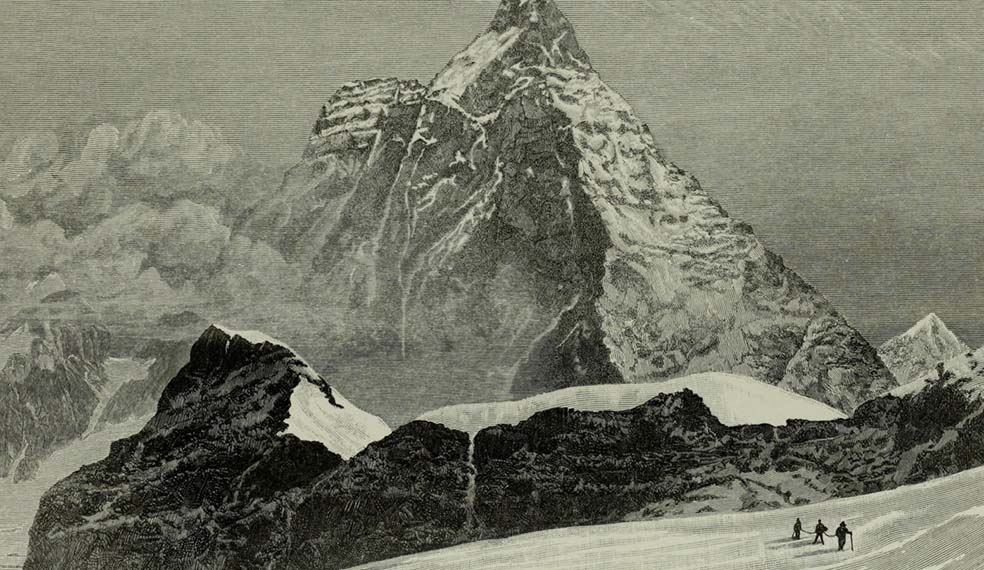 It is a snowy January morning in Zermatt and you are on the way to the Sunnegga underground funicular. Although many of the higher lifts are closed you’re going to have a great ski. When you have “friends in high places” who can recommend the best skiing for the conditions, whatever your level and whatever the weather, you are privileged indeed. You look up to where the Matterhorn would be if it were not hiding behind heavy clouds and swirling snow. Not a place to venture in January!

But, back in 1862, long before Zermatt had seen a railway let alone a ski lift, a plan was hatched. On a day such as this, three intrepid climbers were making a bid for the summit of the mountain reputed to be impossible. Spoiler alert, they didn’t make it.

They were: Thomas Kennedy, an industrialist from the Yorkshire city of Leeds, and among the most ambitious and skilful mountaineers of his day; Peter Perren, Zermatt guide famed and sought after for his strength, determination and positive attitude; and Peter Taugwalder, the same Taugwalder whose feet were to be among the very first to tread that elusive summit on a sunnier day, three years hence (July 14 1865). By 1862, many attempts on the Matterhorn had been foiled by sheer ice that glazed the upper rock faces. Kennedy hit upon an audacious plan. Perhaps a blanket of snow might make the ascent more secure. He set out to Zermatt in winter.

He found a sleepy village. Few outsiders ventured up to the remote community in the depths of winter. Kennedy already knew Peter Perren and the two of them spent a day at Furi getting accustomed to the unusual occupation of climbing through drifting snow. They decided that it would be advisable to employ another strong body and Peter Taugwalder was up for the challenge. With four small children at home, Taugwalder was probably happy for some income to help them through the winter, albeit for so risky a project as this.

The three trudged through snow up to Schwarzsee, already a tough call, and slept the night in the Chapel. Before light next morning they began their ascent. The northerly wind was bitter and strengthening. Progress was torturous. But they struggled on, no one, as Kennedy would later recount in his presentation to the Alpine Club, wanting to be first to give up. Eventually, it was Peter Taugwalder who made the call, and his judgement turned out to be sound. Going on was not an option. Perren argued for attempting to reach the next arrete, they tried but, by now, the outcome was clear. Kennedy agreed. It was time to go down.

The first successful winter ascent would not be until March 1882, by three guides of the famous Carrel family from Val Tournenche, Jean-Antoine, Jean-Baptiste and Louis. They were employed by Vittorio Sella. Today it is a climb reserved for highly experienced mountaineers whose stamina and determination will be well-tested.

For me, it’s time to board the cosy, efficient funicular up to Sunnegga, maybe stop for a hot chocolate at the restaurant and watch for the opening of the next lift up. The runs through untracked powder before anyone else gets up here will be gold. I might be a bit of a wimp compared to Kennedy, Perren and Taugwalder. But that’s my sort of January!

The story of Jean-Claude Killy