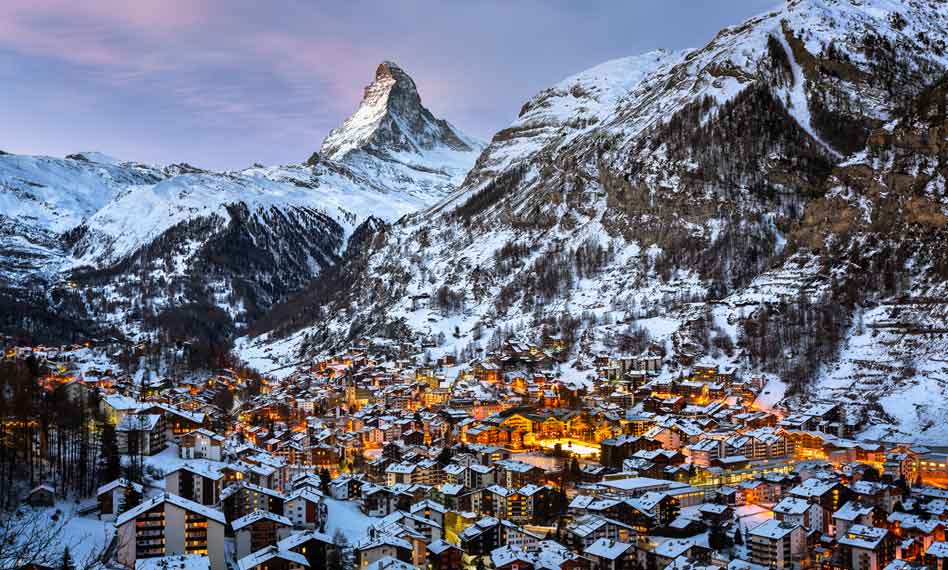 We are extremely proud to represent five Swiss resorts in our port folio, indeed we found our home in the finest of them all, Zermatt. However the other four resorts, Gstaad, Verbier, Klosters and St Moritz are superb destinations and are by no means completely overshadowed by our first choice. Let’s take a look.

Gstaad stakes a valid claim for 'most luxurious ski resort in the Alps'. Its rolling mountains and prestigious international schools have long made it a first choice holiday destination and second home for royalty, the extremely wealthy and celebrities alike. This charming, idyllic traffic free village offers incredible scenery, charm and most importantly, superb skiing. Gstaad is situated in the Oberland region of Switzerland and offers over 200km of finely groomed pistes which are serviced by 53 lifts. Cable cars connect surrounding ski areas such as Wispile and Rinderberg. With hundreds of kilometers of piste and cross-country trails you’re guaranteed lots of opportunities for all levels of ability, from beginner to expert.  Glacier 3000 offers skiing, pretty much the whole year-round.

The second favourite pastime of visitors to Gstaad is shopping. To be honest, you’re spoilt for choice and in serious danger of maxing out your plastic. The middle of the village features a delightful and picturesque promenade lined by numerous boutiques, restaurants, art galleries, and hotels. Designer labels such as Louis Vuitton, Hermes, Chopard, Brunello Cucinelli, Prada, Moncler, Ralph Lauren, and Cartier all have flag ship stores in the village, while many smaller boutiques carry labels such as Chloe, Dolce & Gabbana, Tod's, Burberry, Dior, Oscar de la Renta, and Marc Jacobs, it’s a shoppers paradise.

Next up, Klosters, its luxury ski chalets carry a certain regal air, amidst a relaxed village atmosphere with an affluent vibe. The scenic contrast between the steeped wooden valleys and high craggy peaks presents a beautiful setting. Nestling in the spectacular Prattigau valley, Klosters is a traditional Swiss village with a friendly and peaceful atmosphere. Whilst the resort is favoured by the British Royal family, it's also a very relaxed and informal resort. Klosters offers over 300km of varied piste and is sure to please skiers of all abilities.

You don’t have to be a skier to enjoy Klosters. There are 32kms of prepared walking paths as well as the opportunity to skate. Or how about a dip in the outdoor heated swimming pool? In addition, tennis and squash courts means there will never be a lack of things to do for the sporty in this beautiful resort. For those who enjoy their Apres ski, Klosters has it’s fair share of excellent bars and one or two popular nightclubs affording the chance to dance till the early hours.

Klosters exudes an elegance and style not found in many other ski resorts. Klosters Platz is the heart of the village and hosts a cluster of upmarket, traditional-style hotels situated around the railway station. The cable car taking you up the wooded slopes of Gotschna starts in the heart of Platz and is worth a ride, as long as you’re ok with heights. The village spreads along the valley road, morphing into the countryside; then you come to the even quieter village of Klosters Dorf, and the gondola to Madrisa. Time seems to slow down in Klosters, it’s that kind of place.

Moving on to St Moritz, which is one of the most famous ski resorts in the world. It’s idyllic lakeside location and stunning scenery acts like a magnet for visitors. The chic and fashionable were here at the beginning and ensured it’s reputation as ‘the’ place to be seen. Its heyday in the early 60’s saw it feature in many films, when location directors were searching out chic and fashionable destinations. Boasting unparalleled history and heritage as a winter holiday destination, St Moritz offers an attractive mix of nature and culture.

St. Moritz is also a big draw for keen skiers. It's micro climate means it receives over 300 days of sunshine per year as well as boasting great snow records. You'll be in powder heaven with up to 350km of pistes and 25 lifts to carry you to all corners of this extensive ski domain. The St. Moritz ski area is renowned for its variety, it truly is the perfect place for the whole family to enjoy. Experienced skiers might like to tackle the World Cup run off Corviglia to St. Moritz Dorf for an adrenaline fueled descent and there are also some more difficult runs around Piz Nair, which can be accessed from the village. St Moritz boast no fewer than 34 mountain restaurants, there's something for even the most discerning of tastes.

Verbier is a pretty special ski destination. Lying on a terrace at around 1,500 metres, facing south and the Grand Combin massif, the resort has some incredible vistas and benefits from some gloriously sunny days throughout the winter months. Famous for its off-piste with the surrounding peaks full of impressive chutes, gullies and couloirs it has some of the most challenging terrain in the Alps. From Verbier’s high point at the top of Mont Fort at 3330m, you will be treated to panoramic views across the Alps including the Matterhorn, Dom, Dent Blanche, Dent d'Hérens, Grand Combin and the Mont Blanc massif. As part of the Four Valleys ski domain you can ski Verbier, Nendaz, Veysonnaz, La Tzoumaz and Thyon under the one lift pass, with over 410 km of marked pistes. How about that!

Visitors flock to Verbier from all over the world for the authentic Swiss charm, beautiful traditional ski chalets and the vibrant and buzzing town. Verbier plays host to some amazing international events the year round, including overnight mountaineering and ski touring races, the Ski Alpinism World Cup event and an International Show Jumping Grand Prix. A truly international and glamorous ski destination.

Verbier has a number of fascinating museums and galleries that are well worth visiting and display the fascinating journey that Verbier has taken from a simple farming hamlet to an international ski destination.

Today, accommodation in Verbier consists predominantly of traditional Swiss-styled chalets, albeit very luxurious traditional Swiss styled chalets but there are also a number of outstanding international hotels including the ultra modern and stylish W Hotel, which opened its doors in 2013.

Which bring us to Zermatt, Switzerland’s most famous resort and the home of SkiBoutique, dominated by the majestic Matterhorn, which towers over the southern tip of the valley and is Zermatt’s very own calling card. Boasting the highest skiing in Europe, Zermatt is skiable 365 days a year thanks to its glacier. Its renown mountain restaurants serve up some of the best cuisine to be found on the slopes anywhere in the world.

As Switzerland’s most famous resort, Zermatt attracts visitors all year around, and the skiing ranks amongst the very best. It has snow sure slopes from late November to the end of April making it ideal as an early season destination. With access to 360 km of pistes, with the added bonus that you can ski across the border into Italy’s beautiful Aosta Valley. Truly a must ski resort for anyone with a passion for snow, it is a vast ski area.

Zermatt was once a farming community long before skiing became a major tourist attraction and in the area next to the Grand Hotel Zermatterhof several old buildings show the traditional building style of the original Walser residents. Some of the old barns and grain stores in the resort are up to 500 years old.

Winklematten at the southern end of the village, the ‘Beverly Hills’ of Zermatt, is surrounded by beautiful pastures allowing you to ‘ski out’ from much of the accommodation to access the Furi lift station. It boasts stunning Matterhorn views. At the northern side of Zermatt sits the exclusive ‘Petite Village’ with its collection of stunning chalets all lit by night to produce a fairytale scene. These chalets nestle into the hillside above Zermatt giving stunning views of the whole valley and village leading up to the imposing Matterhorn. Just 2 minutes from the Sunnegga lift station this is a premium location.

Central Zermatt boasts a collection of hotels and some very special chalets that hug the river Vispa, which bisects the town. Church Square is the hub for most town events, including the New Year’s Eve fireworks display which is actually quite a moving experience.

As a car free town, there’s a quiet calm and a delightful ambience of footfall and birdsong and one of Zermatt’s unique sights are the electric taxis and buses which transport both skiers and pedestrians from one sector of town to another, allowing you to explore the full area wherever you choose to stay. For the romantics among us there are also traditional horse drawn carriages and sleighs, fur lined of course.

It’s fair to say that whichever Swiss resort you choose, you really can’t go wrong. People will have their favourites and return year after year but you really won’t know which is your favourite until you try them all.