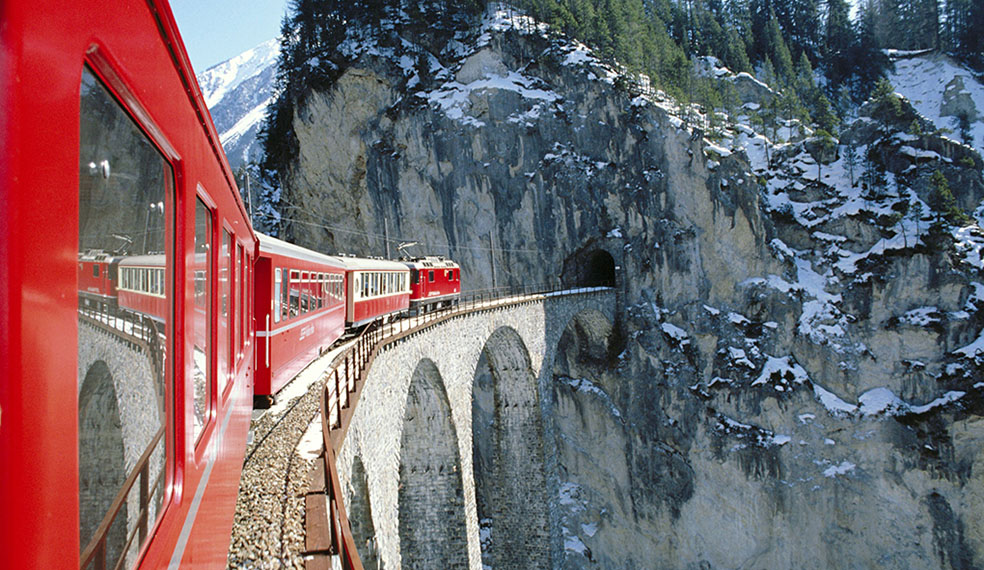 Normally, on a train journey, you’d want to get to your destination quickly, without delay, but on the Glacier Express the experience is the journey.

The fact that it’s an eight hour ride is actually a bonus, there’s so much to see and what you do gaze upon, through the panoramic windows, is for the most part, truly awesome and spectacular.

The Glacier Express travels between St Moritz and Zermatt, two stunningly beautiful Swiss resorts, world renown and not without good reason. St Moritz is set lakeside and attracts the well to do. There’s an old world charm here but St Moritz doesn’t rest on it’s laurels and is no faded star. The resort might have gained it’s reputation in the 60’s when it was THE place to be seen but it’s moved with the times and has reinvented itself many times.

Zermatt, on the other hand never had it’s own heyday. This stunning resort was never the flavour of the month, to be passed over when the next resort became fashionable. Zermatt is timeless and is as pretty as a picture and has an eternal appeal. The fascination for Zermatt started 150 years ago, when Edward Whymper was the first to conquer the foreboding Matterhorn, and started a trend for climbers the world over. Nestled as it is in a natural three sided bowl formed by the mountains on it’s flanks, there’s a cosiness here that feels like an embrace by mother nature. The air of tranquility is also aided by the fact that it’s car free. The footfall and birdsong creates a wonderfully calm soundtrack to the delightful charm in resort.

In summer 3 trains leave each resort in the morning and arrive in time for tea. An overnight stay and a return journey the day after is well worth the price. Crossing 291 bridges, passing through 91 tunnels and climbing over the 2,033m high Oberalp Pass, the scenery is varied. The journey is beautiful all year round, so no matter whether you experience the journey is summer or winter, you’re assured of exceptional panoramas. There’s an option to don headphones and listen to the running commentary, or you can sample some Swiss Folk music but mostly you’ll just want to gaze in awe as the vistas unfold and change throughout this fabulous journey.

The Glacier Express first ran in 1930, however no through trains were operated between 1943 and 1946, due to World War II and there was further interruption to services in 1991 when a huge landslip just below Zermatt at Randa, completely disconnected the railway and road. On 23 July 2010 a Glacier Express train derailed, one passenger perished and 42 were injured. The accident was blamed on human error.

Large portions of journey utilises a rack and pinion system both for ascending steep grades and to control the descent of the train on the back side of those grades. Between 1986 and 1993, the operators invested nearly CHF40 million in constructing 18 new first class panorama cars for the train. By 2005 more than 250,000 passengers were traveling on the Glacier Express each year. In 2006 a few scenes of the documentary film ‘The Alps’ were shot inside the train, and further new panorama cars were added to the Glacier Express passenger car fleet. In 2008, parts of the route were listed as UNESCO World Heritage Sites. Currently, the Glacier Express is especially popular with tourists from Germany, Japan and India.

Until 1982, the Glacier Express operated only in the summer months, because the Furka Pass and the Oberalp Pass were both snowed over in winter. However, unlike the British who’s trains stop services for the wrong kind of snow, the Swiss sorted this problem and the trains now run throughout the year.