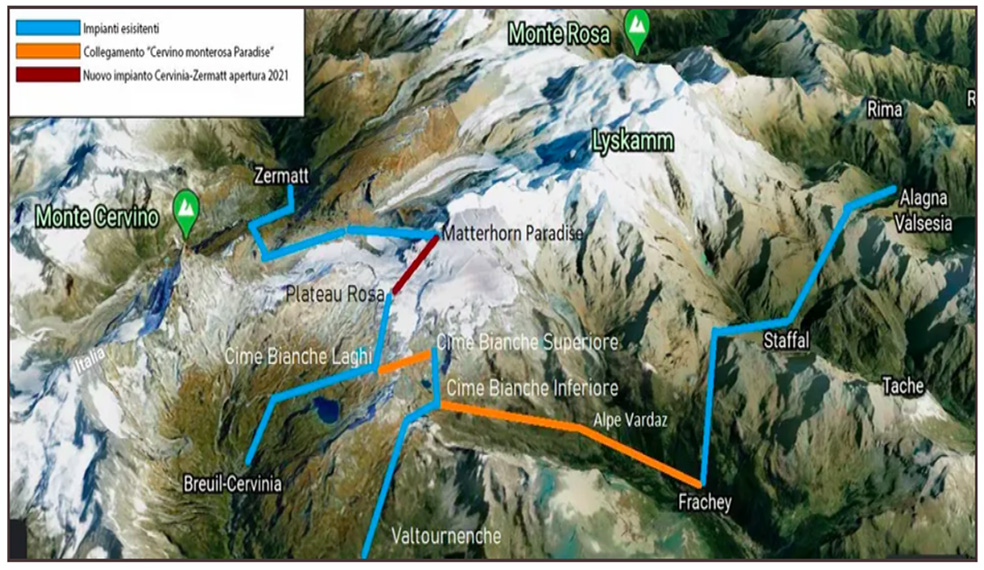 It has been talked about for years and it’s one of the most ambitious tourism projects in the whole of the Alps.

The connection between the "Colle delle Cime Bianche and Saint Jacques" would expand and give extra life to one of the largest ski areas in the world, with important economic and social impacts on all the areas concerned and included in it’s realisation. A working party was set up in order to explore the possibility and highlight some fundamental points in keeping with its own "Manifesto".

The ski lift in question would connect the Breuil-Cervinia, Valtournenche (both in Italy) and Zermatt (Switzerland) with that of Val d'Ayas, whose ski lifts are already connected with those of Gressoney and Alagna. This would constitute a single skiable domain that encompasses the "Cervino Ski Paradise" and "Monterosa Ski", which would finally be linked together.

Two countries (Italy and Switzerland), three regions (Valle d'Aosta, Piedmont and Valais) and 5 districts (Zermatt, Cervinia-Valtournenche, Champoluc, Gressoney and Alagna) would all be linked together. Beyond the naturalistic beauty of the landscape, something of no small importance!, the high altitudes which would be developed would guarantee snow well beyond the classic winter seasons, with a truly unique spring. Without forgetting that in the summer you have the opportunity to ski at 3,500m, this new system would be easily accessible from Italy, not only from Cervinia but also from Val d’Ayas.

As mentioned, this would result in an important economic impact throughout the Aosta Valley. The completion of the project would in fact lead to a greater influx of tourists, with the absolute need to expand and strengthen the tourist infrastructure, from hotels to bars and restaurants on the slopes, with all the related activities that would follow. It would certainly be an answer to the crisis we are experiencing today, as well as taking an important step forward to be increasingly competitive on the national and international tourism market in the future.

The investment, estimated at approximately 66 million euros, is among the largest in recent years throughout the Aosta Valley and for this reason careful evaluation and consideration of environmental and economic impacts will be important so as to have a clear vision of the project. Particular attention will be paid to its boarding systems, to ensure easy access for the disabled, who will have the opportunity to admire the scenery of the great peaks even from the highest altitudes.

The project will also includes a museum centre which will tell the story of the mountains, its fauna and flora, to emphasise the close bond that has always existed between nature and man. The populations of the countries concerned were decidedly in favour, with a referendum on the project returning a very positive outcome.