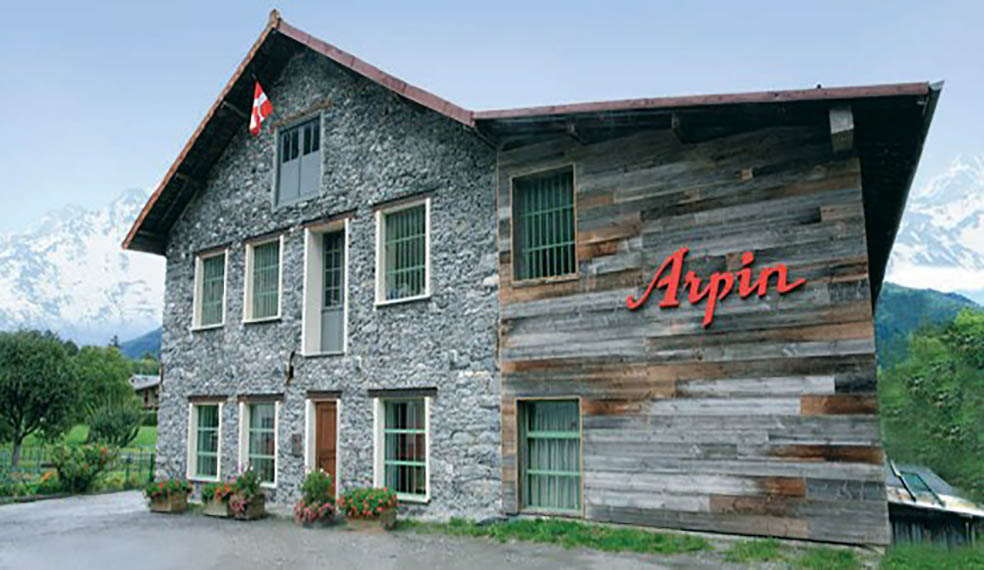 Recently, while Jo and I were out and about visiting our beautiful new luxury ski chalets, the Arpin brand kept appearing in the various French resorts and chalets we visited. So I decided to investigate a little further.

Arpin is a 200 year old family-run woollen mill, nestled in Seez, on the way up to Val d’Isère, one of the most breath taking mountain ranges in the French Alps. Since Arpin was founded in 1817, it remains a family firm and is now in the hands of the eighth generation

Only the wool from sheep raised and fed in the ‘alpages ‘ (pastures) of the Savoie are used in the making of Arpin products. Water from the Versoyen, a small river known for it’s purity, is used to rinse the wool and, as the process does not involve any toxic waste, water can then be returned to the river. Mountain winds coming through the open windows of the factory building and the sun warming the tiles of the roof overhead are used to dry the wool that has been spread across the wooden floor of the chalet. During this process, which can take 3 to 15 days, depending on the strength of the winds, the wool is acting as insulation to the rest of the building below.

From the sheared wool to the making of the finished items, such as custom made rugs, blankets, upholstery and cushions, Arpin is involved in the fabrication and creative process every step of the way.

Many of the machines that work the wool from sorting, spinning to weaving are listed as ‘Monuments Historiques de France’ and ultimately result in a fabric that would be impossible to reproduce other than by hand weaving. There are various qualities of woven wool available from Arpin, including the legendary Drap de Bonneval and the Muletière: felted weaves, which can be treated like leather, as they won’t fray. The fabric is incredibly tough, dense and naturally waterproof and stain-resistant.

In its history Arpin has clothed the original mountain guides in Chamonix (1821), the armies of the Duke of Savoy, the 1890 Italian expedition to the Himalayas and the 1949 French Polar expedition so you are following in illustrious footsteps.

You will find Arpin in many of the areas’ top hotels as well as in some of our French chalets such as the beautiful Ecurie in St Martin de Belleville. Arpin has worked for many of the greatest names in fashion & design including Hermès,

And you will find Arpin shops in Seez, Chamonix, Megève and Val d’Isère as well as stockists in many of the other leading French resorts so why not treat yourself to the perfect holiday souvenir and a little piece of Savoyard history.