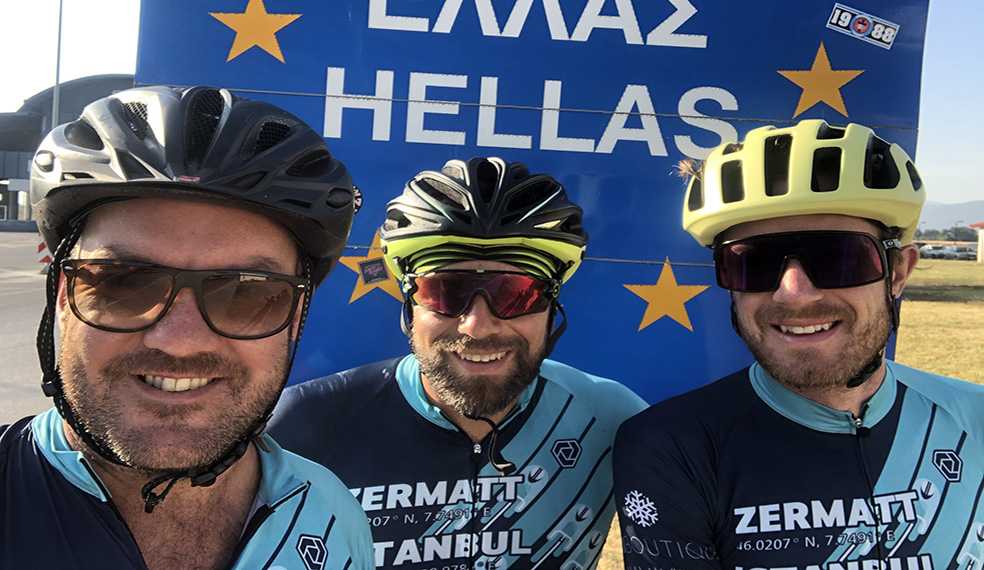 A Journey Of 2,700 miles starts with the first pedal stroke, to borrow and subvert a well known phrase. Unfortunately the first pedal stroke of this particular odyssey was in the pouring rain and low temperatures of a cold and wet Thursday morning in Zermatt. The destination was Istanbul, which was beginning to seem like a crazy idea. There’s nothing like cold and wet to dampen the euphoria of a bike ride. It would get worse.

Within 10k, Phil’s pedal had sheared from the crank. Adam’s hands were turning into frozen fish fingers and my pops’ back hadn’t recovered properly from a slipped disc. The four of us were a sorry sight descending from Zermatt into the valley way below. Bedraggled and wet, with one of us pedalling with one leg and another furiously blowing into his cupped hands. The traffic didn’t seem to have much empathy for our struggle. Passing at close quarters and spraying us with rain seemed to be deliberate. I cursed quite a few of them and myself for concocting this hair-brained scheme to ride for 14 days through 10 countries.

The literal icing on the cake was the early autumn snow which was falling above 1,000 metres, which was where we were heading once out of the valley. This was early September and snow wasn’t supposed to be on the menu. I’d imagined the first day would be an enjoyable ride amongst the stunning peaks of Zermatt and the Simplon Pass. The early autumn temperatures would be warm, not too hot to make the climb up the Simplon an ordeal. That’s what thought did! The first day was the polar opposite.

Day one ended with a ride along the corniche of Lake Maggiore to our first nights stop in Asona. Not a bad way to finish a disheartening day of incident and horrible weather. On the way my dad’s rear mech cable had given up the ghost, Phil’s pedal had dropped off and my gears were playing up. All were fixed en route. The shower and the beer were very welcome in a rather dodgy B&B. Kit was washed, a hot dinner was enjoyed and sleep was welcome. I dreamt of sun and warmth.

Bleary eyed and slightly sombre, we rode away from our overnight shelter to face another day. We soon cheered up, the sun came out, the roads were good and the scenery was wonderful. Day 3 was a return to horrendous torrential rain for the first 5 hours. By the time we got to Verona for lunch the sun had started to peek through the clouds and our spirits were up. I had suffered what turned out to be the only crash on the whole journey. While trying to ride over the threshold of a bike path my front wheel slid out from under me and I came down, smashing my head on the tarmac. I was shaken and considerably stirred, my helmet, taking the full force, was shattered. I was ok after a spell in a coffee shop and was able to continue. We were on the shores of Lake Garda at the time. The lake was being whipped into a frenzy by the very strong winds. The waves were surfable and the rain was horizontal. We were cursed.

As the days rolled by and the miles melted away we got into a daily rhythm. The weather improved considerably and my doubts about the whole thing started to recede. We were starting to enjoy this very much. We’d done Switzerland and Italy, Day four saw us say arrivederci to Italy and enter Slovenia for an hour or so then into Croatia. We were making good time but a little behind schedule. The various pit stops for repairs had stacked up and we were maybe half a day down by the end of day 5. We figured we could make it up by doing extra miles each day from there on.

Day 6 saw us down to three riders. After an overnight in Crikvenitia, my dad’s back said enough. He’d been in a bit of pain since the start and the 800 plus kilometres since then hadn’t improved matters. He’d been quite comfortable while riding but off the bike was a different matter. He was struggling to walk, and wasn’t sleeping too well. He couldn’t get his shorts or socks on in the morning and he was forced to call a halt. I could see he was gutted and quite emotional to be out of the running. The body can only take so much and isn’t slow to tell when enough is enough. So we rode away leaving him to recover. He ended up being bed bound for 3 days but recovered to be able to make the journey, by plane, back to our home in Palma.

We were a day away from the halfway mark. We’d planned to do 7 days riding then take a rest day in Dubrovnik. As we were down on schedule the rest day turned into half a day. As we rode away from Dubrovnik on the morning of the 9th day. We still had 6 more countries to pass through and a little more distance than we covered in the first days before rest day.

We got into a routine, the scenery was always worth the effort, the distance was shrinking and we were confident that we could do this. At the start in Zermatt, it seemed such a long way to go but now we were over half way and we were all getting stronger and fitter. The experiences we were having, good and bad, were going to be memorable and we were forming a bond that only an adventure that takes you out of your comfort zone can foster between people.

The weather had been very kind to us since day 3 and we were getting nearer to our goal. There was a sting in the tail. Day 12 was the worst day on a bike I’ve ever experienced. The Turkish road we were on was a dual carriageway that went on relentlessly for 280k’s. The traffic was constantly buzzing around us for the whole distance. The road rose up in long drags then went downhill, which should have been a respite but there was a very strong headwind and we were actually having to pedal hard. This continued all day long, up and down, up and down. Just Horrible, the only thing going downhill easily were our spirits.

At the end of that torture we were just one day and 138k from the finish line. On roll out, on the last day, the sky was dark and foreboding, then the rain started to lash down. We’d given our rain capes to the Joost, the support driver, who was making his way to the hotel in Istanbul. We were reduced to scrounging bin bags from a grocery store. The owners friend took pity on us and chucked in a couple of capes. I knew Istanbul was a big city but I didn’t realise I’d have to ride through 80k of busy suburb amongst crazy drivers. It’s a toss up which day was the worst. This was no fun.

Some very good friends had travelled to Istanbul to meet us on arrival. It was so good to see them and ride through the pink shoelaces that they’d fashioned into a finishing line tape. Nice touch. We were each given a trophy. I couldn’t quite believe we’d finished that we were here, it seemed a little surreal.

We spent the next 3 days in Istanbul doing normal things for once. No need to ride anymore, no day long slogs in the saddle. I kind of missed it, the routine, the experiences. I have to confess a little pride in myself for achieving what I’d set out to do. We managed to raise 70% of our target for a Breast Cancer charity. We did the ride for ourselves in reality but it seemed a good thing to benefit someone else through our efforts. Every single penny raised went to the charity.

As the days have passed the realisation of what we did has started to sink in and I smile to myself from time to time about the highs and lows of the incredible, memorable enterprise. Thanks to Joost for joining us in Croatia to take a bit of weight off as support driver. To Joke, Paulina, Sophie, Stacey and Stuart for being there at the finish line and spending quality time with us in Istanbul. And thanks to everyone that donated to the charity.