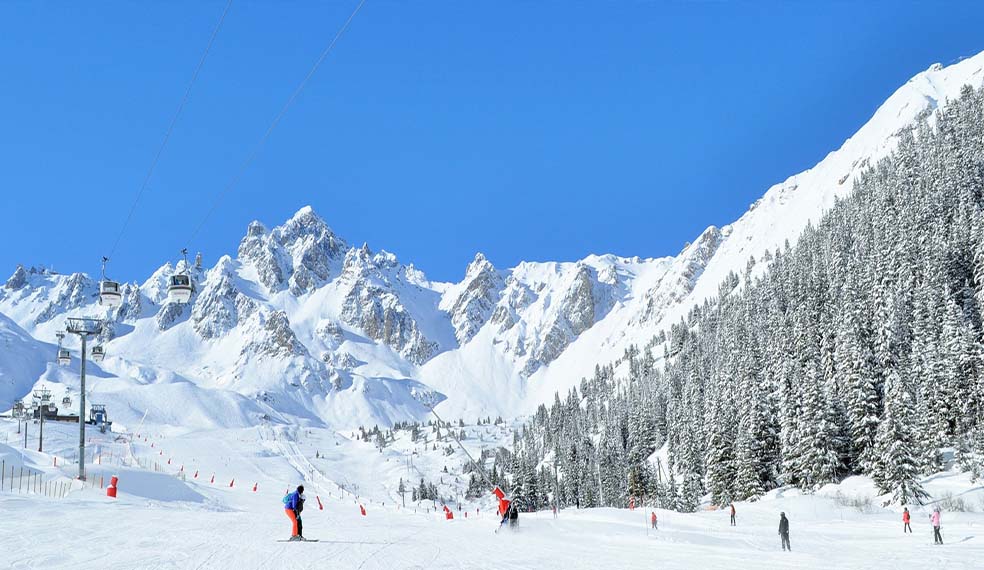 Courchevel was no different to the thousands of little villages dotted all over the Alps. Until skiing became popular, it was just a collection of small hamlets and farmers fields. It’s documented that in 1032 the Romans paid a visit and made the wider area of Savoy part of the Holy Roman Empire.

Not much else was documented until the turn of the 20th century when Courchevel was still little more than a few high mountain pastures and dense forest. There were no towns and barely any villages of any appreciable size with most locals working the land or working in the saw mills.

Courchevel was first visited by summer tourists, walkers and naturalists keen to take in the air of the high mountains and discover the Alpine flora and fauna. The first hotel opened in 1925 for winter business but you had to be pretty fit. With no lifts yet built, the only option was to walk or climb up the mountains and ski back down again.

The original idea of Courchevel as a resort was conceived during the Second World War when in 1942, the French Commission of Tourisn expressed and interest in creating a super ski resort. The man to realise their wishes was the town planner and architect Laurent Chappis. Chappis was a natural choice to direct the development of the resort in the immediate post war years. Courchevel 1850 was significant, as it was the first resort in France to be constructed from scratch, rather than based around an existing village. Laurent Chappis (8 May 1915 – 28 December 2013) was born in Aix-les-Bains, France. He practically wrote the rule book on how to design a ski resort. Chappis was a keen ski tourer exploring the mountains around Grenoble in the 1930s before joining the army and serving in the early stages of World War II. A decorated war hero he was captured in an attack on a German position in the final days before the French surrender and served five years in a PoW camp in Austria.

He completed his doctorate in captivity, the subject was the development of a ski resort in the Trois Vallées area. His stated aim was to create a resort that was as close to nature as possible, no concrete or high rise buildings and no levelling of forests. His ideas were often controversial, especially with developers more concerned with profits than aesthetics. In the 1960s he was appointed as a United Nations expert on mountain development. Chappis is also credited along with the architect Denis Pradelle with creating a modern, functional style of mountain architecture which rejected both traditional Savoie styles and the Tyrolean chalet style of architecture.

In March 1946 the first ski lift was begun and a chairlift between Courchevel and Les Tovets was installed. The plateau of Les Tovets was developed to become what we now know as Courchevel 1850. The renaming of the levels of the resort would prove to be controversial. Courchevel was already the name of a small hamlet further down the valley. The inhabitant were incensed at having their name appropriated and being relegated to the title of Courchevel Dessous or Lower Courchevel. Therefore a compromise was reached and it was agreed to name all the levels of Courchevel, with their altittude included in the name to distinguish one from the other. Another man to make a difference to Courcheval’s success was Emile Allais. He spent 10 years in Courchevel from 1954 as technical and sports director. He used skills and experience that he had gained in America to help shape Courchevel into the major resort that it is has become today.

The 1950s and 60s saw massive developments taking place, not always considered to be for the better. By 1973, it could truly be said, that the 1942 vision of the French Commission of Tourism, had been realised when the neighbouring resorts of Val Thorens and Meribel were linked to Courchevel, creating the largest ski area in the world.

Construction of Courchevel altiport began in 1961. It became the first international mountain airport and is renowned for having one of the shortest runways in the world, measuring only 525 metres. The landing strip is angled at a gradient of 18.5% to help incoming aircraft to slow down. There is no go-around procedure for landings at Courchevel, due to the surrounding mountainous terrain. The airfield primarily services smaller fixed-wing aircraft such as the Cessna 208 Caravan, as well as helicopters. The runway has no instrument approach procedure or lighting aids, thus making landing in fog or low clouds unsafe and almost impossible. The History Channel program ‘Most Extreme Airports’ ranks it as the seventh most extreme airport in the world.

The Tarentaise Valley boasts the biggest concentration of world-class ski resorts in the world. Most well known neighbour systems are Paradiski (Les Arcs, La Plagne) and Espace Killy (Val d'Isère and Tignes). There were once plans to interlink all systems and resorts to create the largest ski area in the world. However that vision was ended with the creation of the Vanoise National Park.

Today Courchevel has no fewer than 5 accommodation sites, of which 4 are integrated into the ski area. The original village of Saint-Bon remains a part of the resort and offers holidaymakers accommodation at 1100 meters above sea level in an authentic village setting. It does not have ski lifts connected to the domain but offers regular shuttles. A ski slope allows a return by ski to Saint-Bon. Just above is Courchevel Le Praz at 1300 meters above sea level. Like Saint-Bon, Le Praz is a historic village, inhabited year long before the ski industry developed.

With Courchevel 1550 the altitude begins to be felt. A part of the resort is located directly on the slope, the architecture alternates between residences of apartments and collective or individual chalets. Courchevel 1650, now Courchevel Moriond is renowned for its many days of unbroken sunshine. Courchevel Moriond extends up to 1800 meters of altitude in La Daille and offers a privileged access to the ski area.

Finally Courchevel 1850, is the flagship of the resort. It is here that Courchevel has built its reputation as a bolt hole for celebrities and the very wealthy. Courchevel 1850 is home to 4 Palaces and many 4-star and 5-star hotels.