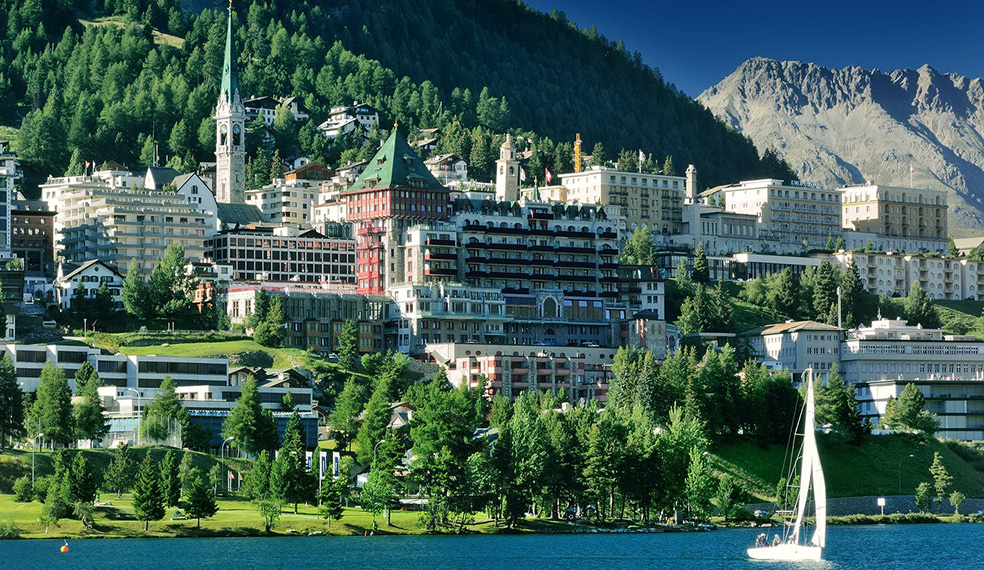 A survey conducted in 2014 found St Moritz to be the second most expensive place in the world for tourist and business accommodation. The survey put the average price for one night in Saint Moritz at $183 while the average for New York is $246. How did it get to be so exclusive? Read on!

Location, location, location. You may have heard this mantra when talking to an estate agent about the home values. The same criteria applies to St Moritz. Set lake side, amongst stunning mountain vistas, St Moritz has a lot going for it in terms of location. Some places are simply unlike any other; the mere mention of their name summons up evocative images and emotions. St. Moritz is one such place. Its unique appeal began long before the days when Roger Moore raced down the slopes as James Bond. Alfred Hitchcock was inspired by Engadin’s black crows and Gunter Sachs and Brigitte Bardot whispered sweet nothings to each other in the snow. All lured by the special magic and reputation that St Moritz didn't have to try too hard to earn.

The story goes that the St. Moritz as we know it today began in the summer of 1864, when hotelier Johannes Badrutt made a bet with some of his British guests. He promised them that, in addition to the gorgeous summers, winters in St. Moritz were also pleasant and on clear days you could enjoy the sunshine on the terrace without wearing a jacket. The bet was that if his word about the winters turned out to be hot air and not to the Brits liking he promised to pay their travel costs and accommodation. The following December, the group of Brits, accepting Badrutt’s bet, crossed the Julier Pass, covered from head to toe in furs. Upon arrival in St. Moritz they were met by blue skies, warm sunshine. Badrutt, stood waiting to greet them without a jacket, with rolled up sleeves and a beaming smile. Winter tourism was born. The anecdote, although certainly true was probably not exactly the catalyst for summer tourism to flourish is St. Moritz. The truth is more than likely more complicated than that.

By 1896, St. Moritz became the first village in the Alps to install electric trams and opened the luxurious Palace Hotel. It was here that Switzerland’s very first electric light was switched on. The novelty and pioneering spirit attracted the aristocracy and the well to do. Slowly but surely the St. Moritz stock was rising. A horse race was held on snow in 1906, and on the frozen lake the following year. The first ski school in Switzerland was established in St. Moritz in 1929. The Winter Olympics were held here in 1928 and again in 1948.

However, the recorded history of this remarkable place began a lot earlier. Around 3,000 years earlier. After all, St. Moritz originally owed its reputation to the healing mineral springs that inspired the town’s spa and bathing traditions.

As the world’s number one Alpine holiday destination, it is not surprising that the Winter Olympic Games were held not once, but twice here in the heart of the spectacular and beautiful Upper Engadin lake district. What’s more, the Albula and Bernina routes of the Rhaetian Railway are included on the UNESCO World Heritage List, making this sun-kissed Alpine metropolis the world’s only destination to have both UNESCO and Olympic Games credentials.