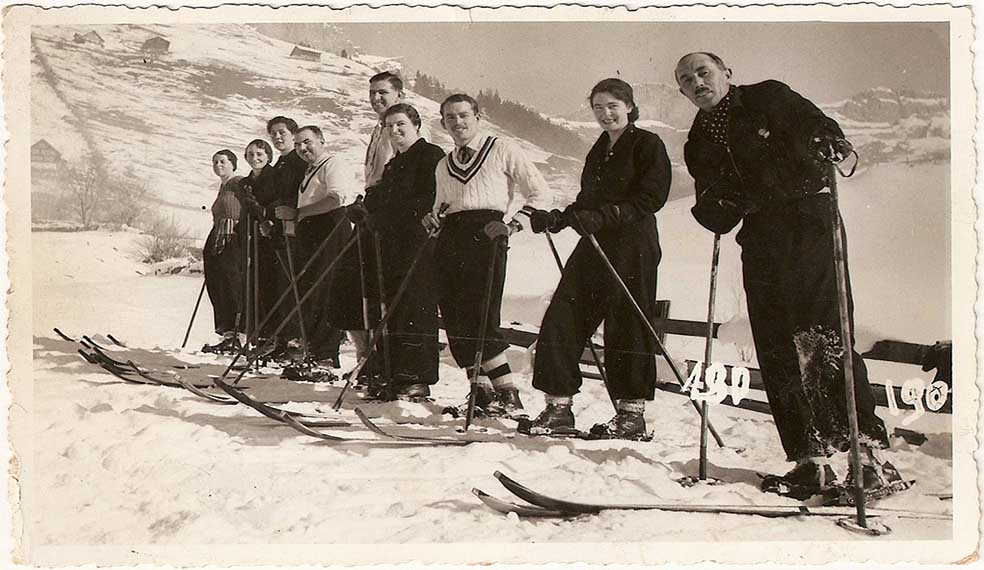 Catered ski chalets are a relatively modern concept and while they are most popular on the British market and most common in France and Switzerland, they owe their early origins to an Austrian.

In 1932 the following newspaper advert appeared in the personal columns of the London Times:

This was the beginning of a new type of ski holiday. The advert was placed by a young Austrian women called Erna Low who was in London studying and who couldn’t afford to get home to see her family. She devised a clever scheme that would get her back to Austria and share her love of the mountains with her new English friends.

Her advert attracted five enthusiastic clients and for the princely sum of £15 each they got a fortnight in Solden which included full board in the one and only inn, rail travel to and from the resort, ski hire and tuition, and, of course, a lesson in German. The trip went so well that Erna was soon organising more – her knowledge of the area, personally selected ski instructors and home-from-home places to stay were the start of the luxury catered ski chalets that we know and love today.

Those early skiing trailblazers were a hardy breed and they needed to be – they wore stout, leather, lace-up boots and simple straps and ties held boots and wooden skis together - and together they stayed: safety releases were a thing for the wimps of the future. So were ski lifts - if you wanted to ski, then you carried your skis and walked up and up and up. Hardly surprising that the Stubai and Hintertux glaciers were quiet places with only a few hardy skiers.

Travel and skiing in the Alps was interrupted by the war but in the late 1940’s keen skiers were once again braving the slopes. Skiing in locations such as Klosters, St. Moritz , Megeve and Meribel was the winter sport of the aristocracy and many of the resorts  we know today were still small, rural communities belonging to local farmers. In the 1970s and ‘80s the skiing business went through a massive growth phase with hotels developing, previously un-skied villages and valleys becoming resorts in France, Austria, Italy and Switzerland and we saw the growth of specialist ski operators. What had been the sport of the few became the sport of the many with cheap deals and overnight buses heading to the snow.

Catered ski chalet holidays in the early years cannot be compared to the luxury ski chalets we enjoy today. There was shortage of hot water, bathrooms were limited in number and always shared and there was no catering. It was a huge gamble to make guests share a chalet for a week. The plus point was meeting new people, making new friends and having fun in the snow but the minus side of it was sharing a room with unpleasant guests. However, the success of the ski chalet holiday encouraged developers to build high-rise apartments to meet the growing demand and to make ski holiday more affordable.

With the introduction of apartment buildings, the chalet holiday lost its competitive edge on price but this led to a change and an upgrade in chalet holidays so that they offered other benefits - chalets now had private bathrooms, hot water as well as chalet hosts and chefs to serve breakfast, lunch and dinner. Chalets became a new niche market, as now the difference compared to the affordable but cramped ski apartments was the luxury that was on offer. This development has continued and luxury catered ski chalets today have facilities such as swimming pools, saunas, cinema rooms and hot tubs as standard and, canapés, champagne and chauffeurs come as part of the whole package.

In 2003, Channel Four ran a “Grand Designs Abroad” episode that followed the restoration of a 17th century farm into a ski chalet. The Ferme de Moudon in Les Gets, was an important stepping stone in the development of the luxury catered chalet and new heights of style and interior design had arrived in the Alps. Today the sky’s the limit and every season new uber-luxury catered ski chalets are on offer.  From humble beginnings amazing things have grown – I wonder what Erna Low would think.